Mainz – The “Karat Gold Cooperation” has failed twice in the last instance and thus failed in its legal action against “Steinberg Marketing GmbH”. Both the Regional Court in Mainz and the Higher Regional Court in Koblenz considered the application, the appeals and the complaints to be insubstantial, and no claims existed or were made.

Among other things, the court states that the ICO financing model, which the respondent had agreed with the applicant, was a speculative transaction with the crypto currency KBC, which is intended to generate high profits for the applicant. On the homepage of the Bundesanstalt für Finanzaufsicht (BaFin – Federal Financial Supervisory Authority), there is an explicit warning against investments in an ICO financing model. BaFin warns investors who acquire tokens via an ICO that they are investing in a highly volatile investment that carries the risk of a total loss of capital.

In the same way, the court quotes in accordance with the BaFin: “If the applicant is threatened with insolvency because she has made “uncovered promises” to customers within the framework of the ICO initiated by her regarding the exchange of 100 units of the crypto currency KBC into gold, this shall not be considered an emergency as defined in § 940 ZPO. Total losses and the resulting insolvency risks are part of the business model of an ICO system…”. (Text excerpt, quote).

Under the file number Landgericht Mainz 10 HK O 4/19, the aforementioned applicant tried to obtain an injunction against Steinberg Marketing GmbH from a company of the “Karat Gold Group”, requesting various information claims, accounting claims and also the transfer of KBCs.

The court found the application to be unsubstantiated and doomed to failure. The court denied all requirements for the issuance of an interim injunction pursuant to §§ 935, 940, 917f ZPO. It also rejected a so-called “ground for injunction”. The remarks (page 4 f.) of the court order are remarkable and groundbreaking, in which clear reference is made to the insolvency risk of the aforementioned applicant and the danger emphasized that the applicant had made “uncovered promises” aimed at an exchange for gold. The resolution states, inter alia: “To the extent that the applicant refers to the fact that she is exposed to a risk of insolvency because she has promised customers to exchange one gram of gold for every 100 units of the crypto currency KBC sold to the customer on July 4, 2019, this does not constitute an “emergency situation” as defined in § 940 ZPO… The applicant has promised her customers the exchange of digital crypto currency (KBC) for gold in anticipation of high profits, without having an overview of the income from their sale. The fact that the court speaks in such clarity of “uncovered promises” and of a “risk of insolvency” for the other party is remarkable and very rare.

The applicant then lodged an appeal with the Koblenz Higher Regional Court, which is the competent court of appeal. There, too, the applicant (file number 6 W 189/19) failed in a final and binding judgment by the decision of 03.07.2019. The Senate of the Koblenz Higher Regional Court determined and gave detailed reasons that the “immediate appeal” was unfounded. There were no claims whatsoever, in particular no claims to surrender.

Thus, Steinberg Marketing GmbH has achieved a significant success with the legally binding decision and the well-founded decisions, which corresponds to investor protection as defined by the BaFin warnings. All allegations against Steinberg Marketing GmbH have proven to be completely unsubstantiated and inaccurate in every respect, a fact which was examined after careful investigation by the judicial authorities.

The defendant, Steinberg Marketing GmbH, believes that its doubts, concerns and assumptions, which led to the decision to separate from the companies of the Karatbars Group, have been fully confirmed. The current events demonstrate what is to be expected from the business model of the gold exchange and confirm the BaFin’s warnings. This confirms the applicant’s concerns and shows that these concerns have been substantiated and justified by the court.

The texts and articles published by the individual authors do not reflect the opinion of the editors. The editorial staff only adopts or shares the views of the authors to the extent that this is expressly indicated in the respective text. 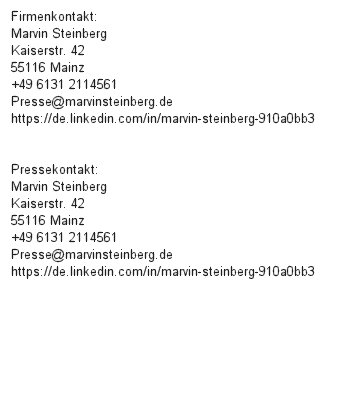