VANCOUVER, BC / ACCESSWIRE / July 27, 2022 / Gambier Gold Corp. (TSXV:GGAU) (“Gambier” or the “Company”) announces an update on the Company’s mineral claims and properties as well as a corporate update.

Gambier issued the final two million shares to complete the Detour West option agreement with the vendors of its flagship gold property near the Detour Mine in Ontario, Canada and now owns 100% of the project. These shares along with the assessment report filed with the Ontario Ministry of Natural Resources, keep the property in good standing. The vendors of the Detour West property will retain a 2.5% Net Smelter Returns royalty (NSR), of which 1% can be repurchased for $500,000. The Company will continue to put its exploration efforts into this flagship property, and we expect to announce the exploration plans for the Detour West property in the coming months.

On Sep 21, 2021, the Company came to a Mineral Property Acquisition Agreement with Eagle Bay Resources Corp, an Exploration Company in British Columbia, to sell the Carbo Property for $150,000. The Company received $150,000 cash in the sale of the property, which was recognized as other income during the year ended March 31, 2022. The sale was never disclosed to shareholders via news release and was considered non-material information which was only disclosed in the November 29, 2021, MD&A.

The new management team completed the financial audit with the auditors Crowe Mackay LLP. The financial statements for the year ended March 31, 2022, along with the MD&A have been filed on SEDAR (link attached). https://www.sedar.com/DisplayProfile.do?lang=EN&issuerType=03&issuerNo=00026505

During the audit process, several items were found that were not properly managed by previous management, including one cashed cheque issued with no payee, several cheques issued to insiders without invoices and above previously paid monthly amounts, and invoices that were not recorded or handed over after the June 1st AGM. The Company took steps to freeze the bank accounts but the bank balances had been drawn down to a negligible balance with certain payments, while other creditors remained unpaid. After several requests, previous management handed over the cheque books a month after the AGM at which they were removed.

As of July 27, 2022 the Company has a small cash balance. The Company will work to settle any outstanding accounts payable, including one large creditor that previous management did not pay due to an internal dispute. It is expected that the accounts payable will be able to be reduced significantly.

Daniel Rodriguez, CEO of Gambier Gold, commented, “Detour West remains the focus of the Company, and issuing the two million shares completes our transaction with the vendors making Detour West property 100% Gambiers. We will continue to build the team to explore the Detour West property as I believe there are a lot of unanswered questions that merit proper exploration. Losing Hemlo was not expected when I started this process but is a part of the unfortunate legacy that previous management has left behind. We will move forward with the remaining properties while considering the addition of other high-impact assets.” 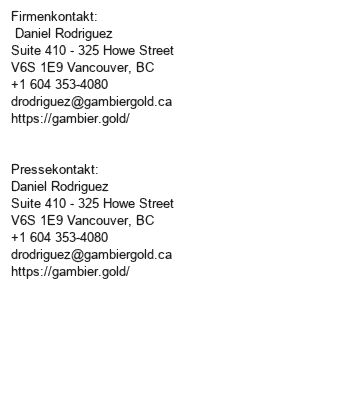